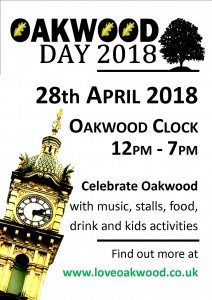 At the end of April, Oakwood Day 2018 will again make Oakwood Clock rock as local residents celebrate the gateway to Roundhay Park. Music, food and drink as well as children’s activities will help get the celebrations underway
OTRA (Oakwood Traders and Residents Association) have organized the 2018 Oakwood Day event on 28th April 2018 at 12pm. There will be music to rock around the clock from local musicians including as well as local artisan craft, local charity groups and food stalls.

Oakwood will rock to musical talent performed by local bands including Roundhay Primary, Roundhay Adult Choir, Roundhay Ukulele Group, FADED CELLS, Roundhay St John’s Primary, Leeds Youth Opera Singers and the Trapfield Tribe. There will be performances from Stage Coach as well as the Chilli Challenge.
Delicious street food will be served around the Clock including delights of handmade pizza, Nachos Amigos, Tasty’s famous burgers and the eastern delights of India. Preston and Stew and Oyster bar will be serving local beers and ciders as well as other alcoholic beverages. Michael Lewin Solicitors will be providing children’s activities and there will be craft workshops, hook a duck plus more soon to be announced. Fantastic local artisans will be showcasing their crafts with stalls from the Oakwood Craft Market.

Oakwood Day will run from 12pm until 7pm on 28th April and is open to all to come and enjoy the Oakwood community.