Roundhay Cottage – the scene of the first ever moving pictures

The earliest celluloid film was shot by Louise Le Prince using the Le Prince single-lens camera made in 1888. It was taken in the garden of the Whitley family house Roundhay Cottage, Roundhay, possibly on October 14, 1888. It shows Adolphe Le Prince (Le Prince’s son), Mrs. Sarah Whitley, (Le Prince’s mother-in-law), Joseph Whitley and Miss Harriet Hartley. The ‘actors’ are shown walking around in circles, laughing to themselves and keeping within the area framed by the camera. It lasts for less than 2 seconds and includes 24 frames.

Louis le Prince’s mother-in-law, who died in October of 1888, appears in the film, which is why there is some certainty regarding its chronology

“Did you know that the first great film mystery began in the garden of  a house in Roundhay? That one of the actors was to die within a few days of her performance? That the cameraman was to disappear two years later and two of the other actors were to die as a result? The garden belonged to Roundhay Cottage, the home of Joseph Whitley.”

Louis A A le Prince had begun designing a single lens camera in 1885 and applied for a US patent on 2nd November 1886. A replica of his camera is displayed at Armley Mills Museum, Leeds. 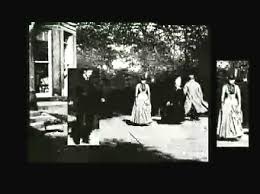 It is not certain whether Louis A A le Prince managed to project his pictures. There are various testimonies claiming that he succeeded in doing so, though E Kilburn Scott who installed an arc lamp as a projector light source for le Prince, does not mention ever seeing pictures projected. None of the films or projection apparatus is known to have survived. All that remain are copies of paper prints from sections of three films.

On 16th September 1890 Louis le Prince mysteriously disappeared. He was last seen boarding a Paris train in Dijon. A photograph of a drowning victim from 1890 resembling le Prince was discovered at the Paris police archives during 2003.

Oakwood Lane was once known as Horseshoe Lane. Horseshoe Cottages stood in the middle of what is now its junction with Roundhay Road, Wetherby Road and Prince’s Avenue.

Around 1900 Springwood House built by Stephen Nicholson and now known as Frazer House, was lived in by Arthur Green Lupton of Messrs Wm Lupton & Co, a well known family of woolen merchants and manufacturers.

Further information about Louis can be found here:

With thanks to David and Sharon Donaldson