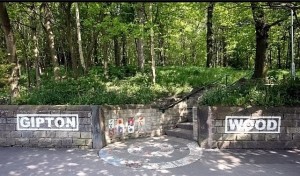 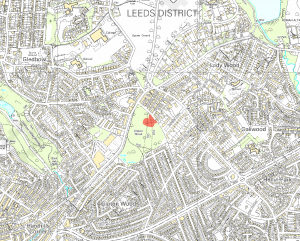 The map on the right shows the site of late prehistoric enclosed settlements in Gipton Wood, at the southern end of Oakwood Drive.

This is what it says about it on the English Heritage site:

The Pennine uplands of northern England contain a wide variety of prehistoric remains, including cairns, enclosures, carved rocks, settlements and field systems. These are evidence of the widespread exploitation of these uplands throughout later prehistory. During the last millennium BC a variety of different types of enclosed settlements developed. These include hillforts, which have substantial earthworks and are usually located on hilltops. Other types of enclosed settlement of this period are less obviously defensive, as they have less substantial earthworks and are usually in less prominent positions. In the Pennines a number of late prehistoric enclosed settlements survive as upstanding monuments. Where upstanding earthworks survive, the settlements are between 0.4ha and 10ha in area, and are usually located on ridges or hillside terraces. The enclosing earthworks are usually slight, most consisting of a ditch with an internal bank, or with an internal and external bank, but examples with an internal ditch and with no ditch are known. They are sub-circular, sub-rectangular, or oval in shape. Few of these enclosed settlements have been subject to systematic excavation, but they are thought to date from between the Late Bronze Age to the Romano-British period (c.1000 BC-AD 400). Examples which have been excavated have presented evidence of settlement. Some appear to have developed from earlier palisaded enclosures. Unexcavated examples occasionally have levelled areas which may have contained buildings, but a proportion may have functioned primarily as stock enclosures. Enclosed settlements are a distinctive feature of the late prehistory of the Pennine uplands, and are important in illustrating the variety of enclosed settlement types which developed in many areas of Britain at this time. Examples where a substantial proportion of the enclosed settlement survives are considered to be nationally important.

The southern late prehistoric enclosed settlement in Gipton Wood is complete, while a large part of the other has also survived. Together, they make an important contribution to the understanding of late prehistoric settlement and land use in northern England.

The monument includes a late prehistoric enclosed settlement and the surviving part of another. They are situated in Potter Newton at the north end of Gipton Wood. The main, southern enclosure has a substantial ditch with a well-defined outer bank. The ditch is about 5m wide and 0.6m deep. The bank is 5m-6m wide and is up to 0.5m high. Immediately to the north is part of a second enclosure which has been partly destroyed by a modern road and housing estate. This enclosure is bounded by a bank approximately 4m wide and 0.3m high. An additional ditch 4m wide with an outer bank about 4m wide and 0.2m-0.3m high is present on the west side of the enclosure.